In order to give you a better service AQUASYS uses cookies. If you continue we assume that you consent to receive cookies on all AQUASYS websites. Here you find futher information about the data protection on the AQUASYS website.

As in January this year, the installed AQUASYS high-pressure water mist (HPWM) system again successfully protected the people in Austria's longest road tunnel and avoided any damage to the tunnel (read more).

On 28th of september a car driver in the tunnel noticed smoke coming from his car. The HPWM system installed in the tunnel triggered quickly and stopped the fire from spreading until the fire brigades arrived. Thanks to the rapid activation of the system, nobody was injured.

The advantages of high-pressure water mist are obvious when it comes to tunnel protection: HPWM systems are characterised by high efficiency even with high fire loads (e.g. tank trucks). Further advantages of the AQUASYS system are the good precipitation and washing out of dangerous, partly toxic smoke particles, the rapid cooling of the centre of the fire as well as the surroundings and also the reduction of the oxygen content in the vicinity of the centre of the fire.

Thanks to the HPWM system, the fire brigade was able to report a "fire out" within a short time and the tunnel was reopened for traffic. In Austria for several years this technology has been protecting some heavily frequented tunnels.

For further information on the fire-fighting systems with high-pressure water mist in tunnels, please contact Mr. Helmut Kern at h.kern@aquasys.at .

back to the overview 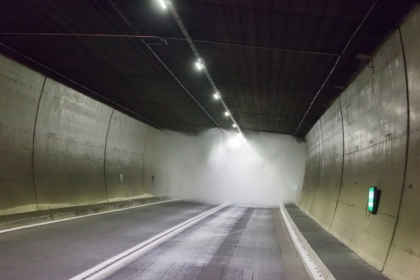